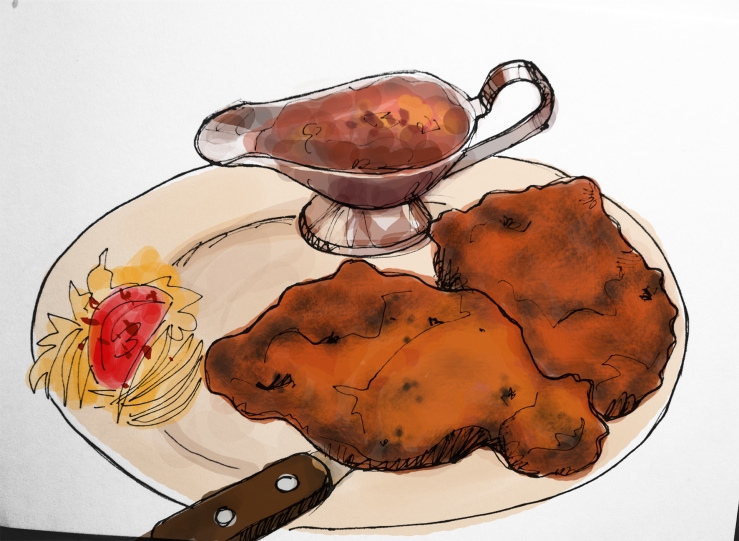 Conquering Schnitzel König
There are those moments you look back on in life and think to yourself “on that day I became a man.” For me one of those days was when I conquered the one kilo of schnitzel at the appropriately names Schnitzel König.
More than a year after my triumph, I returned to the venue where I made history. What I stumbled upon was a place very much different than what I remembered. As soon as I stepped in, I noticed a completely different decor, complete with a television that featured a sleeping cat.
The horror wasn’t over. As I scanned a noticeably smaller menu with inflated prices, I began to panic as I searched for the kilo schnitzel. To my disbelief, it was nowhere to be found. In a frantic tone, I questioned the waitress as to why the “beast” wasn’t there. She informed us that the joint was under new ownership, which explained all of the CAtaclysmic changes, including the absence of the larger-than-life fried piece of pork.
As I began to wallow in self pity — I do that from time to time — I got myself together and used a bit of my yankee ingenuity. I came here for a challenge and I would not be denied! I order an XL (400g) and XXL (600g) version of the standard schnitzel to get to my kilo. It was a pricey venture, but I had a date with destiny.
If one isn’t into grotesque eating (your loss), there are a variety of other schnitzel offerings including, Hawaiian schnitzel, Hamburger schnitzel (inspired by the sandwiches of Hamburg) and Jäger schnitzel, just to name a few.
After passing some time by starring at the sleeping cat, I was in for another surprise. This time, it was a pleasant surprise. As I got my two sections of schnitzel “my eyes became bigger than my stomach.” The kilo looked much bigger than how I remembered it. Our theory is, the “new” Schnitzel König must do their weighing after cooking, while the old one must have weighed their pork before cooking when a fair amount of shrinkage occurs.
Well anyway, enough talk about meat science. I knew I had a daunting task at hand. After a heated battle, I polished off the 600g portion. I was running on fumes, but I had to at least take a crack at the next piece. I dug deep, but it just wasn’t enough. I only ate about 50-100g of the rest. Although I was hoping for a better outcome, there was nothing to be ashamed of after eating between 650-700g of schnitzel. At least I had a tasty treat for breakfast the following morning.
Even the waitress seemed pretty amused by me, so I left her my card. I’m still waiting for her call.
By the way, you’re probably wondering what is hipster about the place. Absolutely nothing. That’s why I love it. Take your vegan diet and shove it!