Forget about Nando’s! If you’re looking for authentic chicken piri-piri,  you need to go to Algarve in Portugal – more specifically, to Albufeira and to a small village called Guia.

He started life with a small café until he came up with the spicy recipe, using piri-piri chillis, oil, garlic and a few other secret ingredients.

Simple, yes, but when you’re known for doing one thing so well, why bother to worry around with extras?

The small, spicy piri-piri, or African bird’s eye chili, is one of Portuguese cuisine’s most unexpected ingredients, one that has traveled thousands of miles across many continents to find its place there.

In Africa, the hot chilies found fertile ground to grow and today they remain an essential ingredient in Portuguese-speaking countries like Angola and Mozambique. During the 1950s, people living in the colonies started to bring sauces and recipes back home. 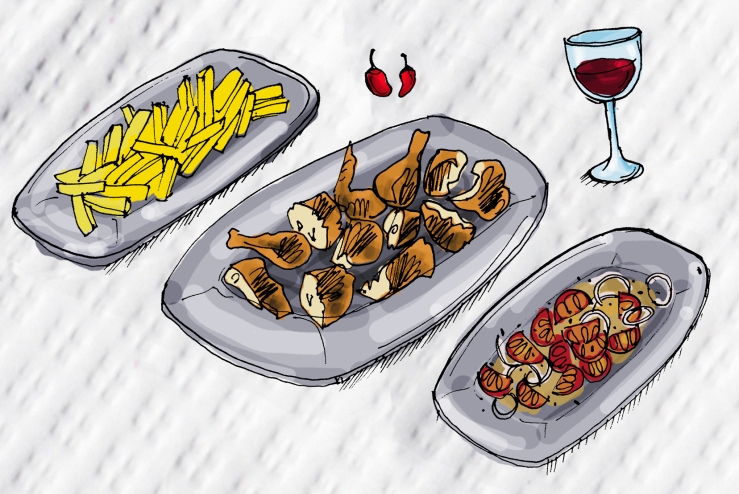 Chicken piri-piri, as well as oil and sauce made from the peppers, became the most popular (“piri-piri” refers to both the condiments and the chilies themselves).

Going out to eat chicken piri-piri is not a gourmet or fancy experience, forget about that! It’s all about eating tasty and crispy chicken and licking your fingers afterwards. Yes, you should use your hands! Don´t feel embarrassed; that’s how all the locals do it. I told you, it is not fancy! But please, do not ever compare this to KFC or try to eat this amazing chicken with ketchup or mayo, that is almost a crime!!!

Once you get to one of these restaurants in Guia ( there is one or more in every street and a few very good, even if  they are not so famous like “Ramires” or “Teodósio”),  what you get is a platter of chicken piri-piri, a platter of fries (not frozen ones) , and a platter of tomato salad. Real tasty tomato, cut in big chunks, slices of raw onion, seasoned with olive oil, vinegar, and oregano – that’s it; no fancy lemon slices or carrot flakes for decoration. With your drinks and bread (local wood oven made bread), it’s normally for around 10-20 euros per head.

One of the secrets of this chicken is that they have to be very small (800gr max.) because a big chicken doesn’t have the same flavor, and these are proper chickens, not one’s pumped with preservatives and growth hormones.

After grilled in a proper charcoal grill the chicken is chopped into small pieces and brushed with the piri-piri sauce.

It is such a simple meal, but still so rewarding. Be aware of the so called chicken piri-piri that someone might try to sell you around the world. It might reveal itself as a fraud and be a real disappointment. 🙂